After a lot of behind-the-scenes organisation from the team leaders it was decided that we were going to go ahead with the second planned catching attempt for the 2021/22 season.

With a large team assembled we were able to catch 58 Oystercatchers, 28 Dunlin, 4 Grey Plover and 3 Ringed Plover. To further the study of how Oystercatcher are using the Exe Estuary, most were colour-ringed and a further five GPS tags were deployed. All the Dunlin and Grey Plover were also colour-ringed and we look forward to receiving reports of these birds over the forthcoming winter.

The main objective was to catch at up to 6 juvenile oystercatchers to enable the remaining 6 UHF GPS (which downloads data to a base station) tags to be deployed. Mist netting early in the autumn is the better as early in the season there are a good proportion of juveniles, but they tend to spend less time at the roost and more time feeding on fields as the season goes on. After being unable to muster a large enough team in August, we had a great response and assembled a team of 12 people for our first session of 2021. After collecting the group’s 18 foot long poles from the RSPB base from Exminster Marshes, Tim Frayling arrived on site to transfer kit from his car to Dave Scott’s truck. From 4.30pm the rest of the team started to assemble and despite problems with trying to find a petrol station with any fuel left, the Cornwall contingent arrived in good time and we walked down to the site via the Warren Golf club track. Fortunately, we had a large team that carried the poles down following Dave’s truck, which was carrying all the kit.

The plan was to set 2 lines of nets around the island roost in front of the hide, however as we had a large team and plenty of nets this was adapted following a suggestion by Robbie Phillips to add a ‘T’ at the end of each line. Despite the fact that on every session there are 1,000+ oystercatchers at the Dawlish Warren roost, we only ever catch a small fraction of these so anything we can do to improve the changes of a catch is taken. The set was a line of a 4 nets in the direction of the hide to Finger Point, with single nets at 90 degrees at the end of the line. A second line, also with a ‘T’ at 90 degrees to the line, in the direction of the railway was set, a total of twelve 12 metre nets. 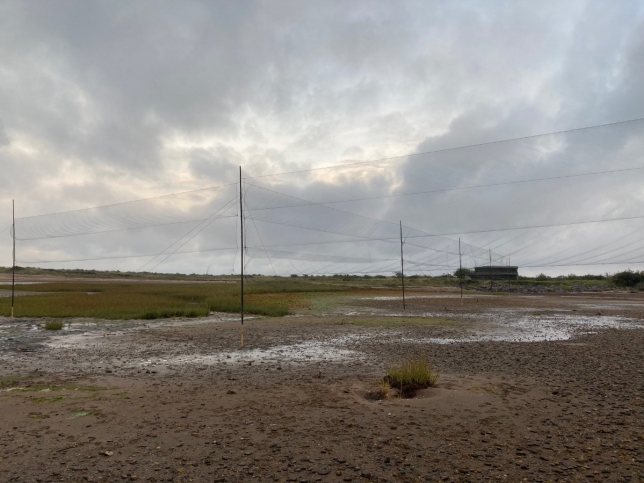 Line of nets with T near Island roost © T Frayling

Weather conditions were favourable with a cloudy sky and 6mph winds coming from the south. With the nets up at 18.45, a few hours before high tide, we set up the base camp on the golf course just behind the hide. Once the fish and chip order was taken, two of the team departed to collect the food, and we waited for darkness. The presence of two fisherman with bright headtorches kept the oystercatchers off Finger Point, and for most of the time the birds were in the ‘recharge’ area in the compartments where we normally set the cannon nets. Watching with the night vision scope we could see two birds in the net, were extracted and taken back to be ringed and processed, just before high tide at 10pm. With new members of the team it was an opportunity for people to ring oystercatchers for the first time. Robbie Phillips led the ringing and processing, including checking the various biometrics, which includes various bill measurements including bill length, bill depth, and bill tip measurements. Once processed the birds were all colour ringed, including an uncoded blue ring above the metal ring to indicate that bird has been GPS tagged. The two adult birds were then tagged by Andy Hoodless with Tim Frayling, who is training to fit tags. The two adult birds were fitted with GSM- GPS tags (which do not rely on a base station as they use the mobile phone network). At 22.20 another two adult oystercatchers were caught, processed and kept in keeping cages in the dark so they could be tagged. The next net check produced another 4 birds were caught, including 3 juveniles, which was fantastic news as we wanted juveniles for tagging. Around 23.15 with the tide dropping some of the team went out to take the nets down and found more birds in the net. The total catch was 12 oystercatchers, 7 were juvenile and 5 were adult. This was fantastic as it allowed to deploy our remaining 6 UHF tags on juveniles, and 5 GSM-GPS tags on adults. 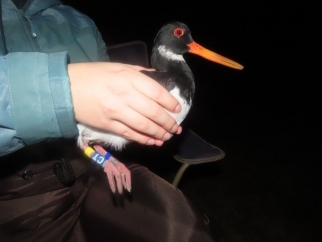 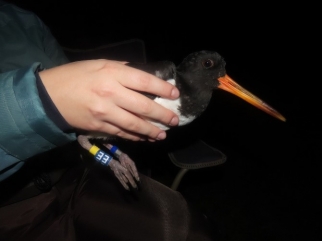 Once the nets had been taken down, some of the team headed back home carrying the poles, and Andy, Tim, and Robbie continued to tag the remaining birds, eventually finishing at around 0245. Simon Lee and Tim dropped the poles back at Exminster at 3am. Thanks to the team: Tim Frayling, Robbie Phillips, Andrew Hoodless, Dave Scott, Jon Turner, Ben Rousseau, Thomas Weston, Charlotte Foot, Sally Kunzig, Kate Fox, Simon Lee and Kevin Rylands. Thanks also to Steve, Stephen and Phil at Teignbridge Council for allowing permission, and for providing chest waders to some of the team. We are also very grateful to the Warren Golf Club for allowing access and letting us process the birds on the golf course. 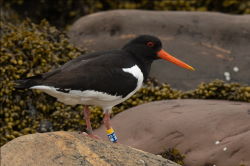 Oystercatcher M5 breeding in Norway © Knut-Sverre HornOf the thousands of sightings of the colour-ringed Oystercatcher of this project, a sighting of 'M5' by Knut-Sverre Horn is one of the most extraordinary. It was re-sighted on 6 June 2020 apparently with a mate at Ekkerøy in Finnmark, northern Norway. Since February 2018, there have been three other Oystercatcher seen on breeding sites in Norway, but these sites are in the far southwest of the country, around the coast about a 1,000 miles away. In a straight line, the sighting of 'M5' is more than 1,700 miles (2,200 miles around the coasts) from Dawlish Warren, where it was ringed on 4 February 2018.

After ringing, 'M5' remained on the Exe Estuary until 24 March 2018, then after the breeding season re-appeared on 17 August 2018 to spend the winter on the Exe Estuary until 21 March 2019. Again, it re-appeared after the breeding season on 9 Aug 2019 and we last saw it on 8 March 2020. Over the winters has not been seen before further than 2 miles away from where it was ringed!

The full life-history of this bird and a map of its known movements can be seen here.

We hope to undertake fieldwork approximately once a month, mainly at weekends, involving either mist-netting or the use of a cannon net. Members of the group live across Britain, although many are based in Devon. A key site for fieldwork is the Exe Estuary and in particular Dawlish Warren National Nature Reserve, where we have a project on colour ringed Oystercatcher.

Birds are marked with individually numbered metal leg rings and, to aid relocation without the need to recapture them, with colour rings. Under special license we are also fitting GPS tags to a small number of birds to help understand the way they use the habitats around the estuary through the winter and at different states of the tide.

The group welcomes volunteer ringers from anywhere who are interested in taking part in the fieldwork.

The county bird clubs are Devon Birds and the Cornwall Bird Watching and Preservation Society.

For species other than waders the European colour-ring Birding website, voluntarily maintained by Dirk Raes, should be useful.

The group operates with the excellent support of Teignbridge District Council and Devon Wildlife Trust as landowners of Dawlish Warren. Warren Golf Club kindly allow access across their land.

We are also grateful to he RSPB and David King for allowing us to operate on their land at Exminster Marshes and to Torridge District Council for co-ordinating permissions at Northam Burrows.

The value of the projects would not be fully realised without the excellent re-sighting work undertaken and publicised by the Dawlish Warren Recording Group.

We are grateful to Natural England for funding the rings and GPS tags, and for providing staff time for ongoing management of the projects. We are also grateful to the Game and Wildlife Conservation Trust (GWCT) for staff time for fitting the GPS tags, organising the project and dealing with data. Devon Birds have generously provided some funding for colour rings.