With a new moon on the 23 February and high tides several hours after sunset, the entire week of the 24-28 February appeared suitable. However, stormy weather conditions predominated, restricting our options. Winds were forecast to relent for a short while on Thursday evening, so a session was planned and a team assembled. In the event conditons were near perfect for mist-netting. The objective of the session was to target Curlew and continue colour-ringing of this species on the Exe, to add to the 7 birds already colour-ringed.

Due to the later sunset time of 17:51 and larger team as well a new familiarity with the site, the team assembled 2 hours later than last trip, this time meeting at 17:00. On arrival 21 curlews were located feeding on field 13 (left field, non-RSPB), before these lifted over onto the marsh. A near identical net set to early February was put up, with 2-shelf nets set on 2 large freshwater pools. With and increased team of 9 ringers and 5 helpers we had the ability to also set nets in field 14 (right field, RSPB). This field comprised of a series of fantastic new habitat recently created by the RSPB, with engineered scrapes and ridges running between pools. Two lines of full height wader nets were set around these scrapes. 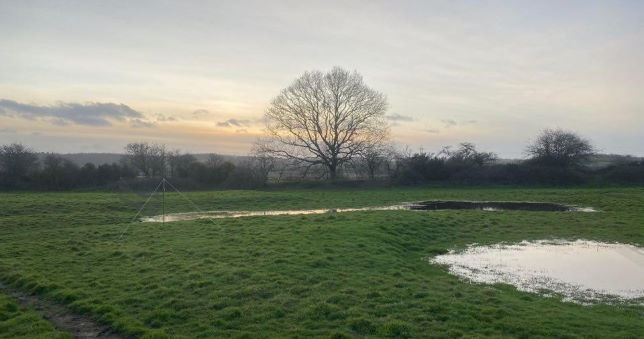 With dusk pretty much over by the time nets were set, the sounds-lures were put out and the first net round conducted. This produced a surprise of 7 Curlew coming in to roost early, which were quickly ringed, colour-ringed and released. Soon after this we had a second round producing a further 2 Curlew one from each field and 8 godwit. From this point on from each net round up to and beyond high tide we ringed small numbers of waders plus two Wigeon and a Mallard.

All 9 curlew were colour ringed taking the group total to 16 marked birds and the late addition dunlins added two more to the colour-ring study. Curlew were all aged as adult and the rest of the waders made up a mix of both first winter and adult birds in a 50/50 split. The mallard was an adult female and both wigeon adult males. No Curlew were fitted with GPS-GSM tags during this session as these will be saved for tagging of more birds in subsequent winters. 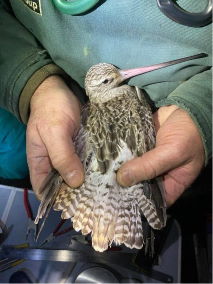 Juvenile Bar-tailed GodwitThis session produced excellent results and based on the colour-ring recoveries by our committed resighters so far will contribute excellent resighting data for future survival analyses. With a large team and a large range of expertise this session gave us the opportunity to undertake training of new DCWRG members and involve RSPB staff in the ringing process. The RSPB team’s enthusiasm and passion for waders matched our own, with discussions about how the data colour ringing and tagging can improve our understanding wader special ecology, survival and how waders use the wetlands and marsh around the Exe Estuary. Thanks, must go to the RSPB and David King for allowing us permission of operate on their land, for supporting our projects and the expansion of our knowledge of waders in the Exe Estuary.

In late December, a potential option for catching Curlew on the RSPB Exminster Marshes Reserve and surrounding wet fields was identified by WeBS counter James Diamond who covers that segment of the shore (thanks James!). Curlew and a mix of other wader had been coming up on to these fields at high tide, both during the day and at night. After work by Ryan Burrell and Tim Frayling in January, permission was secured for targeted mist-netting on RSPB Exminster Marshes and nearby fields from a private landowner to support our colour-ringing and GPS-tracking studies.

The objective of session on these holdings was to target Curlew to commence our fitting of the 10 GPS-GSM tags we secured through the Natural England grant. After inspection of moon phase and tides, recces by local DCWRG members and after discussion with other successful Curlew mist-netters, Ryan concluded that our best chance would be the end of February but that also an attempt could be made at the beginning of Feburary. Though the tides and moon phase and his availability to fit the GPS tags ruled out any catching taking place then. Due to an opening in Ryan’s schedule, the decision was made on the morning of Saturday 1 February to conduct a pilot session the following evening despite the unsuitable conditions of a bright moon and low high tide meaning catching was highly unlikely.

An hour or so after dusk, 2 Lapwing and a Woodcock were caught. This was a surprise, as the moon was still bright, and both these species are known to be good at identifying and avoiding nets. Several rounds later, in advance of high tide, a single Grey Plover was caught. As with the Lapwing and Woodcock before it, this was a very welcome first for the group, especially as we have a colour-ringing scheme registered for this species. Half an hour before high tide, when the team had all but given up hope that the Curlew were going to be pushed from the estuary by the tide, a flock of ~20 Curlew circled above the field and landed in the freshwater pools, 6 were caught and promptly extracted, during which time a further two Curlew and a single Grey Plover were caught. Five GPS-GSM tags were deployed on Curlew in total (3 Females and 2 Males), with the remainder held for winter 2020/21. These will record a fix every hour for potentially the next 2-3 years tags but unlike those which we have used on the Oystercatcher’s at Dawlish, transmit their data via the mobile phone network, approximately every 21 days.

This session was a really exciting development for the group and our projects, with a further session planned in late Feburary to fit further colour-marks. Thanks must go to the RSPB and David King for allowing us permission to operate on their land and for supporting the project to allow us to expand our knowledge of waders in the Exe Estuary.

On 17th December 2019 a team of 7 – Ryan Burrell, Chris Dee, Tamsin Quinn, Thomas Weston, Alys Perry, Robbie Phillips and Tim Frayling met at Dawlish in the afternoon to set three sets of mist nets near the island, the re-charge area and Finger Point. Once we had set the nets, half the team went to collect the chip order. During this time, the thermal scope came in handy identifying a bird in the net early – a Dunlin, which was colour ringed (with the code ‘AJ’ - see re-sighting history here). Although we were initially hopeful of catching many more, a fog descended which seemed to result in the birds being less willing to move around. We ended the evening with 6 new birds – 1 Dunlin, 3 Redshank and 2 Oystercatcher. Unfortunately, although Ryan was ready to deploy GPS tags if they were juveniles, typically both Oystercatchers were adults.

We hope to undertake fieldwork approximately once a month, mainly at weekends, involving either mist-netting or the use of a cannon net. Members of the group live across Britain, although many are based in Devon. A key site for fieldwork is the Exe Estuary and in particular Dawlish Warren National Nature Reserve, where we have a project on colour ringed Oystercatcher.

Birds are marked with individually numbered metal leg rings and, to aid relocation without the need to recapture them, with colour rings. Under special license we are also fitting GPS tags to a small number of birds to help understand the way they use the habitats around the estuary through the winter and at different states of the tide.

The group welcomes volunteer ringers from anywhere who are interested in taking part in the fieldwork.

The county bird clubs are Devon Birds and the Cornwall Bird Watching and Preservation Society.

For species other than waders the European colour-ring Birding website, voluntarily maintained by Dirk Raes, should be useful.

The group operates with the excellent support of Teignbridge District Council and Devon Wildlife Trust as landowners of Dawlish Warren. Warren Golf Club kindly allow access across their land.

We are also grateful to he RSPB and David King for allowing us to operate on their land at Exminster Marshes and to Torridge District Council for co-ordinating permissions at Northam Burrows.

The value of the projects would not be fully realised without the excellent re-sighting work undertaken and publicised by the Dawlish Warren Recording Group.

We are grateful to Natural England for funding the rings and GPS tags, and for providing staff time for ongoing management of the projects. We are also grateful to the Game and Wildlife Conservation Trust (GWCT) for staff time for fitting the GPS tags, organising the project and dealing with data. Devon Birds have generously provided some funding for colour rings.